You are here: Home / TLT in Pictures

The TLT in pictures page was setup to help golfers get a better understanding of how a True Length Technology® set of irons will keep every player athletic.

Here is my tallest player (6′ 8″) who came to me struggling with his game. Other golf shops offer a plus 1″ set but this still did nothing for his address.

1 – His original sand wedge is way too short, virtually eliminating all chances of playing a strong game.

Now this golfer has the opportunity to develop his  game from 1 singular  athletic address position.

His original set had him squatting with excessive spine tilt (with every club). Even his long irons created address discomfort and a great deal of miss hits, with topping the ball being the biggest flaw.

Now he remains athletic and has the opportunity to take his game to the next level.

This set of True Length Technology® irons are set up against a wall, keeping their true lie angle relative to the floor. The resultant length of each of these golf clubs ends up at the exact same hand position relative to a correct lie angle. This will promote a singular athletic address position with more on center hits as well as a very repeatable and consistent swing plane.

How is this different from a traditional set of golf clubs? 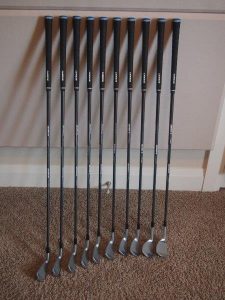 This is an OEM build that will force a variable hand position. The player will be forced to squat with the short irons and grip down on the long irons.

The OEM math is incorrect which does force a variable address position and hand position for every club. Altering how you hold each individual club is not desirable. Consistency is what golfers are after and the OEM length and lie design cannot accomplish this.

TLT fitting charts are available in 16 different length build combinations which will allow the petite to be fit just as well as a giant of a man.

Here is a 6’4 player with a 38 wrist to floor measurement. He is a good player that deals with lower back issues and could not get comfortable with anything less than a 4 iron

Picture 1 – His original Sand wedge where he is clearly squatting and bent over too far. This poor address will result in poor consistency and wayward shots.

Picture 2 – His new Sand wedge built to a TLT Series 12. Now standing athletic with the shortest club in his bag.

Here is another one of my taller players. In the the first picture the 7 iron is simply too short and he is forced to play with excessive spine tilt.

With the TLT 7 iron in his hands he is standing taller and with a more upright spine position. He is overall in a superior athletic address position. This strong address position will be maintained throughout the entire set.

Shown below are 3 sets of 6 – SW in 3 different configurations – Single Length, OEM, TLT

The middle set is an OEM brand that represents if this man had simply gone into a golf store and bought a boxed set. The 1/2″ length change verses the 1/2* lie angle change will force address changes and will lower your consistency. The length varies 2 1/2″ over these 6 clubs

The RH set is a TLT Series 6 that details the reduced length increment that a TLT build represents. Notice that the longest iron in the OEM set and the TLT set are near the same length. However the shortest iron in the OEM set is clearly nearly 1″ shorter than the shortest club in the TLT set. The TLT set only has roughly 1 1/2″ of length variation over the 6 clubs. The TLT set is also designed with 1* lie change per club.

The OEM model will force an average player to squat with a short iron and grip down on the long iron.

The TLT will do the same as the single length set and will keep you athletic regardless of which club you choose.