Dan Connelly is a Master Clubmaker certified by the Maltby Clubmaking Academy.

I found this older article that was written about me a number of years ago. Originally published by The Oshawa This Week newspaper, it was a feature article about my status after passing my Masters class at the Ralph Maltby Club Making Academy in Ohio with the focus on Custom Golf Clubs. 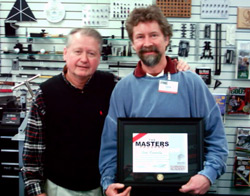 HAMPTON – Dan Connelly has a very exclusive distinction when it comes to golf, and it has nothing to do with his game from tee to green.

The Hampton resident is one of just three people in Canada to have successfully completed the Masters Program at the GolfWorks Clubmaking Academy, regarded as a premier technical program in golf club assembly, repair and fitting. “There were only seven of us at the program, and one guy came from as far away as Puerto Rico,” says Connelly of the four-day program he graduated from in Ohio last month. The extensive training program explored everything there is to know about golf club design, club making and ­fitting, as well as allowing students to interact with founder Ralph Maltby at his design studio.

A lover of the links since the age of 14, Connelly went in search of a new set of clubs about six years ago, and was surprised at what he found. “I couldn’t believe the cost of a high level set,” he remembers. “I thought to myself that I was going to try and build my own set.” When he walked o‑ the green of the 18th hole after his ­first round with a new set he had constructed, he knew right away he was on to something. “I could not believe the difference the way my game instantly improved,” he says. Orders didn’t start pouring in right away. But his dad was his ­first customer, and his sister was soon to follow. Last year, he made 30 sets from the shop just behind his home for a wide range of golfers from duffers to low-handicappers. “I get guys who are highly educated in the game and play scratch golf who are just looking for an extra edge,” says the GM employee of more than 20 years. “I get some other guys who come in and want something so they can hit it as far as they can.

” Having passed the Golf Clubmakers Association 394-question exam with a grade of 92 per cent, Connelly says he’s just trying to “help people improve their game” by customizing a set of clubs “to exactly what they want.” As for the advancements in technology, Connelly “still thinks a lot can be done” to improve the equipment used by players at every level, from touring pros at this week’s Masters, right down to the weekend duffer. But even the weekend duffer can hit it like the pros once in a while. “I’ve had three holes-in-one by people using clubs I’ve made,” he notes.